Exhibit A : Heart of Snow White 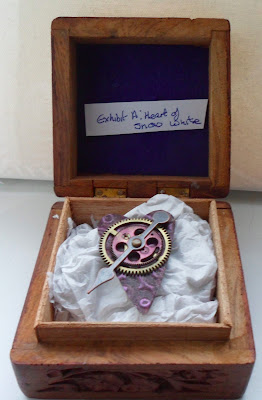 Thank you for your comments on the steam punk heart brooch, more have been made.

This one is inspired by reading Neil Gaiman's version of Snow White and watching far too much CSI (but not Miami - it seems like the joke one crossed with a Ginger unclean Harry.) It made me rethink the story, which had never been a favourite of mine and I made it a touch steam punk, what if the Huntsman was an engineer? and Snow white was more the recent film version but with emotion? By the way had a ball watching the bloody Hansel and Gretal - Witch Hunters, it was so much stupid fun. Grimm guns!

The brooch is a tin heart, embossed, sanded, inked with alchol inks, then a cog and inked cog added and finished with a pointer.

I would like to enter this into the following challenges:
SanDee & Amelie's steampunk challenges - fairy tales
Anything but a card - inspired by - (Neil Gaiman, Snow white and the Huntsman, CSI and Hansel and Gretal witch hunters.)

I'm really liking this latest heart "evil Edna"!
A pal of mine would just love this so I shall have to have a dabble soon :-)

Love Neil Gaiman's stories too AND your awesome brooch in that wooden chest! Hearts kept in chests are rare and mighty treasures (and sometimes weapons of unbelievable destructive power when released and replaced to their places of origin).

What a poetic artefact!

Thank you for sharing this with us at SanDee&amelie's!

Hi hun...gorgeous make as always...and email me about meeting up at Ally Pally..so love to see you for a coffee..!!

Dear Edna, you cannot be so evil, you left such a nice comment on my Hansel and Gretel steam-house...
I see you too kept thinking: what if... Isn't it funny how fairy tales can be interpreted? I like your exhibition of snowwhites heart... And the thoughts behind...
(By the way, I have a Giveaway, in case you are interested. Just entered it today)
Greets, Manu

It really goes into depth watching your art and reading your explanation. This is by far different to what I usually see - but i have to say I love it!
Thank you so much for joining the SanDee&Amelie´s STEAMPUNK CHALLENG
XOXO SanDee

Amazing idea and a beautiful brooch

Love this - so amazing! Lots of love from Laura xxxxxxxx

That's so elegant, love it!

Hello,
Been out of it for awhile but getting back and thought I would stop by to catch up.

This is great. I have just been learning about steampunk and LOVE your Health of Snow White. It is a great spin on a favorite story of mine and a new love of steampunk.

I see you are still creating great art!

Your very unique take on Snow White's heart is fabulous and I loved reading about your inspiration! Thanks so much for joining us at Anything But a Card!

I love the idea of a steampunk heart in a box with the link to Snow White - it conjures up such amazing possibilities. Loved reading your post too.
Thanks so much for joining us at Anything But A Card for this challenge.
Julia